Why do we only incarcerate and not rehabilitate and educate? 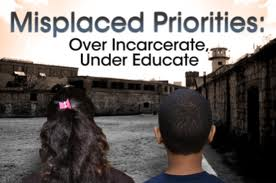 Incarceration is big business. Prisoners are cheap labor; they and their families pay exorbitant prices for food, phone calls, clothing, etc. Most of the young men being sent to jail were represented by overworked and underpaid public defenders who do their best, but let us face it, those with money get a better defense.
“U.S. Has World's Highest Incarceration Rate”
“(August 2012) Since 2002, the United States has had the highest incarceration rate in the world. Although prison populations are increasing in some parts of the world, the natural rate of incarceration for countries comparable to the United States tends to stay around 100 prisoners per 100,000 population. The U.S. rate is 500 prisoners per 100,000 residents, or about 1.6 million prisoners in 2010, according to the latest available data from the Bureau of Justice Statistics (BJS)”.
“Men make up 90 percent of the prison and local jail population, and they have an imprisonment rate 14 times higher than the rate for women.  And these men are overwhelmingly young: Incarceration rates are highest for those in their 20s and early 30s. Prisoners also tend to be less educated: The average state prisoner has a 10th grade education, and about 70 percent have not completed high school. Incarceration rates are significantly higher for blacks and Latinos than for whites. In 2010, black men were incarcerated at a rate of 3,074 per 100,000 residents; Latinos were incarcerated at 1,258 per 100,000, and white men were incarcerated at 459 per 100,000. Since 2007, however, the incarceration rate in the United States has tapered slightly and the 2010 prison population saw a decline—of 0.3 percent—for the first time since 1972, according to the BJS”.
http://www.prb.org/articles/2012/us-incarceration.aspx 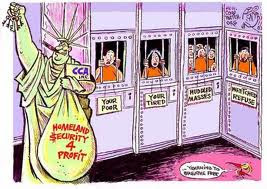 We have for-profit prisons, what that means is these companies only make money if they have prisoners, and make more money if the prisons are full: http://www.huffingtonpost.com/news/for-profit-prisons/. Businesses are always looking for ways to cut corners and save money. Do you think they might do that with prisoners that society thinks are subhuman?
There is currently a lot fuss about for-profit education, but I have not seen any hearings lately about for-profits prisons. Educational institutions do not make money unless people are getting educated; so why is education under such fire and the prison system is not?
The justice system is what it is, and it is better than most, but let us not kid ourselves that it is anywhere near good. A young man of 18 goes to jail for 40 years, is released, and then is expected to function in society? Not too mentioned those who are being found innocent after 20 years! http://www.innocenceproject.org/ 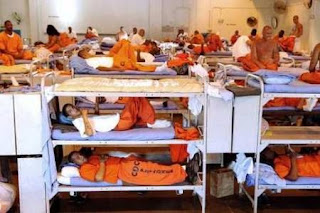 Prison is not pleasant, nor is it meant to be, but sooner or later we do need to give serious thought on our correctional system, because it the system that needs correcting. I believe it starts with education and believing in justice, not revenge.
Dr Flavius A B Akerele
The ETeam

Posted by Flavius Akerele at 8:41 AM