I have worked for “for-profit’ institutions, I have also benefitted from the for-profit education (non-traditional education), so it is safe to say I am not against for-profit education (but I am not a cheerleader). Yes, there are bad apples in the industry, but that is the same in any industry, and yes, there needs to be some improvements made; but we are never supposed to rest on our laurels anyway in education or we start to stagnate.

It continues to sadden me whenever I see national politics and politicians injecting themselves negatively into this particular conversation, because I am a firm advocate that all sectors of the education industry should be truly working together to serve students. By the way, many schools out there operate on a ‘for-profit’ model, but just happen to be non-profit. I think we should really be looking at the ‘non-traditional’ education market rather than just for-profit, especially since they serve the same population.

The amount of energy and taxpayer money that continues to be wasted, by creating divisions is shameful because, that money could have been used to building bridges and improving student services and achievement as a whole.

“U.S. Sen. Richard Durbin of Illinois sent high school principals in his state a letter Tuesday urging them to shield their students from the "often irresistible lure" of for-profit colleges -- drawing a pointed response from one of his constituents, DeVry Education Group.”

“Durbin, a leader among the Congressional Democrats who are deeply skeptical of the for-profit higher education sector, told the principals that he was continuing his work in Washington to "correct federal policies that enable this industry to take advantage of students." But he asked the principals to do their part to "ensure that your students are receiving honest and accurate information about their higher education options. "Students can hardly ride a CTA bus, watch their favorite prime-time sitcom, or surf the internet without being bombarded by attention-grabbing advertisements from for-profit colleges offering a hassle-free enrollment process, federal financial assistance, flexible schedules and a promised path to high-paying jobs and a better life," Durbin wrote. "But too often it doesn't work out that way."”

“His letter cites statistics about the completion rates and debt loads of the colleges' students and suggests that principals remind their students that community colleges offer similar programs "at a fraction of the cost."”

“In its response, DeVry, which is based near Durbin's Chicago home, noted that DeVry has educated tens of thousands of Illinoisans since 1931 and that the company teams with the Chicago Public Schools on an Advantage Academy that lets students earn associate degree credits while in high school. The program, it notes, was started in tandem with the then-head of the city's schools, Education Secretary Arne Duncan, a close ally of Durbin's.

"The facts, and our history, demonstrate our commitment to Illinois students and their success in higher education," wrote Sharon Thomas Parrott, DeVry's senior vice president for external relations and global responsibility. "We encourage the senator to visit our Chicago campus, and our Advantage Academy, so that he can learn firsthand how we serve our students."”

Read it here: http://www.insidehighered.com/quicktakes/2014/04/30/durbin-devry-spar-senators-letter-high-schools#sthash.y69tgkab.dpbs
I know this article will annoy some folks, but I like to think I am looking at this objectively.

Senator Durbin: what are you actually contributing towards helping students? This is not a political question (especially since I never vote along party lines), but a simple education question. Are you helping to solve or helping to divide? Are you consulting educators or political staffers? What is your end goal?

Remember, in the end, it is all about the students…

The ETeam
﻿
Posted by Flavius Akerele at 7:54 PM No comments:

I thought this would be a good article to share at the beginning of the week:
“Take the Shot”
“When it comes to selfies, most institutions agree: promote -- don't prohibit.”
“Bryant University may have started a mini-trend when it banned selfies at graduation two weeks ago. Several more universities last week introduced similar bans on phone use as students approach the stage, arguing that stopping to snap means dragging out an already hours-long ceremony -- or sullying its significance.”
“But unless institutions confiscate all camera-equipped devices, chances are many students will spend at least part of their commencement ceremonies with their arms extended, squeezing as many fellow grads as possible into the frame as they immortalize the day. For many universities, not only is that perfectly acceptable behavior, but it also supports their efforts to engage students with selfies.”
“Frostburg State University will for a third year in a row include language in its commencement program on how to celebrate graduation on social media.”
Read it all here: http://www.insidehighered.com/news/2014/04/28/ban-selfies-most-institutions-say-no#sthash.zFbXxuDa.dpbs
Interesting ‘issues’ that technology seems to develop nowadaysJ
Dr Flavius A B Akerele III
The ETeam
﻿
Posted by Flavius Akerele at 6:25 PM No comments:

“Veterans who return and want an education should be helped in any way possible, and that makes sense: It’s good for them, and it offers them greater opportunities in the future, better jobs at better pay with a more sophisticated skill set. But lately I’ve been thinking about how much I appreciate the vets not for what they did in Iraq or Afghanistan or Fort Benning in the past, but for how they enliven my classes right now, day to day. They inject a clarity and immediacy to discussions and debates, and we all profit from their presence.

For those of us who to teach adults, get to know who is in your classroom because it can definitely add value to the course.

Dr Flavius A B Akerele III
The ETeam﻿
Posted by Flavius Akerele at 7:33 AM No comments:

You must always learn to see the humor in everything, and with today’s climate of “grade grubbing”, I thought this article was worth sharing.
“Professor Beaten Over a Bad Grade?”
“Police are exploring the possibility that a student angry about a grade could have ordered a "hit" on a Miami Dade College professor, The Miami Herald reported. Marc Magellan, a professor of music and humanities, was beaten in a parking lot on the college's Kendall campus last week by an unknown attacker. Mallegan says the assailant yelled "Professor Marc" before punching him in the face and smashing his head against the ground, leaving him with a broken nose and hand.”
“The professor says his assailant's words, along with the fact that none of his personal belongings were taken in the attack, means he was targeted, possibly by a student. "There is nobody I can think of who would have wanted to attack me so brutally unless there was some sort of grudge or chip on their shoulder," Magellan told the Herald. "In my business, yes, the only people who hold grudges are the ones who I've had to drop or fail. It comes with the territory I guess." A college spokesman said this kind of crime, especially in broad daylight, was unprecedented for the campus, and that on-campus security has been increased as a precaution.”
Read it here: http://www.insidehighered.com/quicktakes/2014/04/24/professor-beaten-over-bad-grade#sthash.IYgLRmdN.dpbs

If this was a student, they have indeed earned an F!
Dr Flavius A B Akerele III
The ETeam
﻿
Posted by Flavius Akerele at 7:20 PM No comments:

Why we are afraid of the police: an education issue 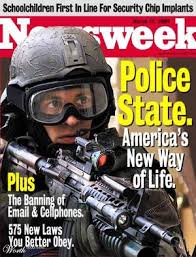 I am not going to present any data because this is not a research article, and I am not going to take on the various police departments because it is not necessary. What I would like to do is just point out some obvious facts and ask: why?

How many of you smile and think ‘owe it’s only the cops” when you see a police car behind you, even if you are doing nothing wrong? I would wager that is an impossibly short list.

How many of you welcome the police into your home when they knock on your door? Again, I would say a very short list.

How many of you feel safe when the police around? Short list.

There seems to be a huge increase in videos depicting police brutality, and a large number of websites dedicated on what to do if you “encounter” the police. Incarceration is up, jobs are down, and it seems the police are increasingly adopting military tactics.

How did we come to the point where the people who we appoint to “protect and serve us” instead instill fear and apprehension? I have heard the argument from the police side about how “no one respects authority anymore”, but I have to disagree for a few reasons:

People respect authority when they are in turn, respected as human beings.

I could go on, but let me say that if only one tenth of all we see about police brutality is true, that is still a very high number. What does this tell our kids? How does that fit into a “civilized” society?

People are afraid of the police and for good reason. Even off duty law enforcement are not spared from police brutality it seems. Law enforcement needs to be educated on how to fit into society before it is too late, and fyi this is not a dig at law enforcement as much as I am pointing out obvious facts.

There is something wrong, and it is getting worse. Educators can help since part of our job is finding solutions.

The ETeam
﻿
Posted by Flavius Akerele at 7:44 AM No comments:

“WASHINGTON -- Some student loan borrowers have reported to federal consumer protection officials that their private lenders automatically placed them in default when their cosigner died or filed for bankruptcy, even when the borrowers were otherwise paying the loan on time.”

“The Consumer Financial Protection Bureau highlighted that issue on Wednesday in a report analyzing the more than 2,300 complaints it had received about private student loan companies from the beginning of last October through the end of March. (The volume of complaints was up by more than one-third compared to the same period last year).”

“The issue is that some private student loans contain terms allowing lenders to demand the full outstanding amount of a loan when a borrower’s cosigner -- often a parent or grandparent -- dies or files for bankruptcy protection, according to Rohit Chopra, the CFPB’s student loan ombudsman who authored the report.”

“In some cases, Chopra said in a call with reporters, lenders have automatically placed a borrower in default upon the death or bankruptcy of the cosigner, without giving the borrower the opportunity to pay the full outstanding amount.”

“The report says that the CFPB “routinely” receives complaints about cosigner problems on private student loans, but Chopra conceded that officials do not know the prevalence of the problems.”

Read it all here: http://www.insidehighered.com/news/2014/04/22/consumer-protection-bureau-says-some-private-loan-borrowers-face-co-signer-issues#sthash.zeNILAWg.dpbs

Have a great Tuesday

Dr Flavius A B Akerele III
The ETeam
Posted by Flavius Akerele at 7:16 AM 1 comment: