Sometimes you have to share lighthearted fun stuff and not take ourselves too seriously.

“A giant runaway snowball crashed into a Reed dorm on Saturday evening, ripping a wall off its studs and narrowly missing a window. No one was injured in the collision.”

“College officials say the ball was some 40 inches in diameter and weighed from 800 to 900 pounds. “It was a big snowball,” says maintenance manager Steve Yeadon.”

“The episode started Saturday during a storm that dumped as much as 12 inches of snow on Portland. A couple of students decided to make a large snowball in the quadrangle formed by the Grove dorms, according to an incident report from the Community Safety Office. They rolled it back and forth across the Grove Quad in what must have at first seemed a Sisyphean undertaking. But as time went on, the frozen sphere picked up more and more snow, gained mass, and grew increasingly ponderous. Soon a rumor sprang up that the Doyle Owl was entombed in its icy heart. By 8 p.m., a crowd had gathered in the Quad and was chanting “Roll it! Roll it!””

“Two students—both math majors—then rolled the gargantuan blob down the path that leads from the Quad to SE 28th Street. Unfortunately, they miscalculated its trajectory. The snowball picked up momentum, veered off course, and smacked into Unit #7 of the Reed College Apartments.”

“Three students sitting in the living room of RCA #7 were startled by a “huge crash” and discovered a giant crack running down the bedroom wall and a goliath boulder of ice outside the window.”

“The two math majors immediately reported the incident to the Community Safety Office and identified themselves as the offenders. (Or should that be snow-ffenders?)”

“It took a Reed maintenance worker 45 minutes to cut through the frosty mass in order to inspect the damage, Yeadon says. No owl was found, but the impact deflected the wall by several inches and broke it clear from its king studs. Yeadon estimates that repairing the damage will cost from $2,000 to $3,000.” 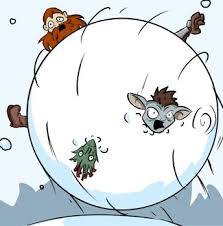 The ETeam
﻿
Posted by Flavius Akerele at 9:53 AM