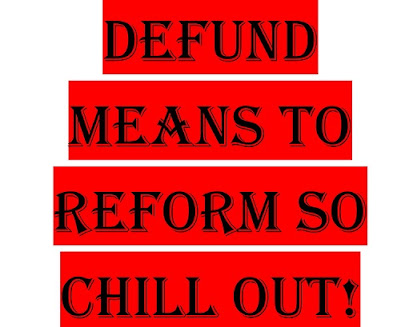 First of all, defunding is not a great term, and I bet even now some people are losing their ever-loving minds when they hear it. Please relax and listen to logic. Also, I am not using specifics here, just general information.

Reforming might be a better term for now, so I will use that, along with some other Rs.

1.      Re allocation of resources and budgets needs to occur. If the police are going to be considered professionals, then they need training that reflects true professionals, and an average of 16 weeks will not do it. Police need more education, training, and psychological and drug testing before they are ever given a badge and able to interact with the public solo. Move that money from military equipment to training officers before they are sworn in; this would weed out a lot of the “bad apples” before they start, and like any true profession, this training needs to be renewed on a regular basis.

2.      Re-imagining the role of police from warriors to bodyguards and guardians. Warriors are trained to kill and subdue their enemies and the public are not the enemy. The thin blue wall must come down, and the thin blue line must be erased, quotas and incentive systems need to go.  There should be no fictitious barrier between the public and the guardians that are supposed to protect them. Like doctors, police should be held to a higher standard, and that should include malpractice insurance and higher consequences for wrongdoing tied to pension or promotions. Police currently are rarely held accountable for hurting and killing their wards.

3.      Respect the people you are sworn to protect, all the peoples, regardless of race, socioeconomic background, or mere suspicion of being a criminal (hopefully training will reinforce this). In the current form, police demand respect of people who are terrified, which to them means absolute obedience. However, this is America, and you cannot expect a country of people founded on rebellion to be subservient. Give respect and you get respect! By showing respect to the communities they are supposed to protect, they will get respect and be rewarded with trust.

The stats show the police have a failing grade in their current iteration, so it seems obvious something new needs to happen, but Reforming police is only part one, there are at least 3 more parts.

District Attorneys need to be transformed to seekers of true justice and not statistics driven deliverers of punishment. We are seeing real results with DAs who believe in justice not just punishment. Justice needs to be truly blind, so that punishments can truly fit the crime.

Prison system needs to change from penal to correctional and rehabilitative. Prison is place of little or no hope, it is place you try and survive like “escape from New York” where the strong prey upon the weak. Right now, the corruption in the prison system is the worst part of the whole criminal justice system because it is profit driven and prison guards are the most corrupt out of all law enforcement officers because there are few eyes on them, and society does not value the people in the prison system as people.

Probation and parole are also a corrupt system due to the profit incentives to collect fines and fees, and the corrupt nature of these officers to exploit desperate people who are just trying to survive. The prison and parole/probation systems recidivism rate are so high!  Their job and promotions should be ranked based upon how few people go back to prison; the idea as that we want them out of a job eventually.

This would take a massive culture and political shift in this country, the lip service and small gestures will not do it, and we must be prepared to fire a lot of people who are not doing their job correctly, because that is what happens in professions; you lose your job if you are not doing it.

This is my translation of defund the police, and if you still feel the system is doing a great job, I wish you well.

Dr Flavius A. B Akerele III

Posted by Flavius Akerele at 10:18 AM